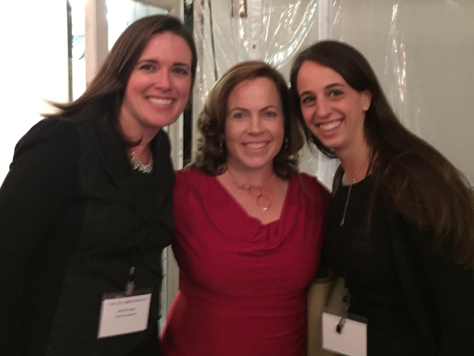 It’s no secret that there is a problem when it comes to women and the business world, in fact there’s a long list of stats that clearly demonstrate the problem.

These numbers are true across most industries and advertising is certainly no exception. Even though over 80% of purchasing decisions are made by women, the people who create the messages targeted to them, are overwhelmingly men.

Three years ago Kat Gordon, a woman who had spent years in the advertising world, decided that something needed to be done about these numbers and created the 3% Conference. Why 3 percent? That was the percentage of women creative directors in the US when Kat created the conference. This year, at the third annual 3% Conference, the team reported that the number is now 11 percent!

When the staff at twtw found out about this conference we knew we had to go check it out. So last week we hopped on the plane and headed to beautiful San Francisco for what ended up being two inspiration-filled days. It was fantastic to be surrounded by so many awe-inspiring women (and men). People from in and outside of the industry spoke on topics varying from ways to raise the number past 11 percent, to how to fight off mediocrity. There were a lot of great moments but here are some of our favorite takeaways.

Dyllan is the mastermind behind the MAKERS project. She has spent several years filming the stories of influential women. In her seriously stirring talk she tells us that she’s learned that we must take credit for what we’ve done. Women have been written out of some important stories in history often because they didn’t stand up and claim their work. Women must be proud of their accomplishments and must not be too modest to take credit!

The famed author of the Athena Doctrine gave a great talk where he shared his experience traveling around the world to find out what makes a good leader. He found that “feminine leadership and values are now more popular than the macho paradigm of the past.” Through his research he discovered that 66% of people agreed that the world would be a better place if men thought more like women. He also advised women on the importance of bringing their “whole selves” to work.

The advertising legend left us with this advice “We need to start to think about collective creativity by bringing all kinds of minds (critical thinkers and creative thinkers) together to spark deeper creative thinking.”

The author of the book Die Empty asked “Why do we so often settle for mediocrity?” To fight mediocrity we must first determine what is holding us back. Is it dissonance (the gap between the why and what); fear (perceived consequences of failure); or expectation escalation (maximizing efficiency at the cost of excellence).

Seth created the Truth in Advertising Act. He pleaded that the advertising agency start making changes because the over-photoshop bodies are causing real problems especially with the youth who often resort to extreme measures to emulate what they see on TV.

Cindy closed the conference with this great quote “A decade is too long to watch the world be deprived of the talent and perspectives of female creative leadership.”

The 3% Conference inspired us in many ways and we’re looking forward to putting what we learned to work. We can’t wait to see what’s in store for next year’s 3% Conference (we hear it might be in NYC)!