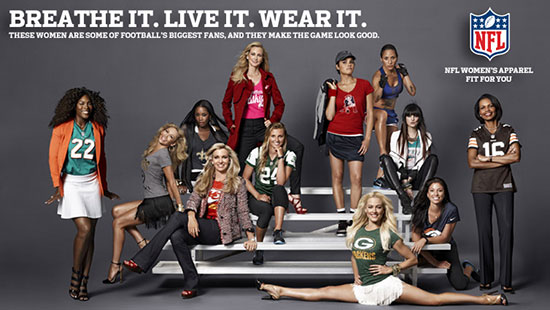 Women must speak up on NFL issues

It’s no secret that twtw is a company run by women who care a great deal about women’s empowerment and advancement. A lesser known fact is that these women also care a lot about football. We don’t watch football because our husbands or boyfriends are watching it, we watch it because our team is playing and we want to be there to cheer them on, we watch it because it is part of our traditions, we watch it because we love it. And we’re not the only ones. An impressive 45% of NFL fans are now women; a fact the NFL seems to have realized only this year.

We can no longer blindly support a league that hands out four-game suspensions for taking Adderall and two-game suspensions for knocking your wife unconscious. How should we interpret and react to this? Do we boycott? As Katie Nolan from Fox put it, boycotting will simply “remove the critical thinkers from the conversation.” So while boycotting probably isn’t the best solution, we do need to call the NFL to task, and although that may start with Goodell, it certainly does not end there. The problem is bigger than Goodell, the Ray Rice situation isn’t a one time issue but the result of a systematic problem in the league.

Does that mean that Goodell shouldn’t get fired? Absolutely not. Getting rid of Goodell would be a good start. Not because he dropped the ball this one time, but because in 2012 he identified the rising number of players being arrested for domestic violence (the most common crime for which NFL players are arrested) and promised to do something about it. Not only did he not do anything about it, he continued to let players get away with it.

Whether Goodell stays or goes we, as women and as football fans, need to make sure that the league continues to address this issue long after the media is tired of reporting about it. So far the NFL has provided $3 million of promotional time for anti-domestic violence campaign ads. The league also pledged a multiyear, multimillion-dollar commitment of money and other resources to the National Domestic Violence hotline, which has seen an 84% spike in calls since the Rice video was made public. We’ll pretend for a second that this isn’t just a huge PR scramble to make people feel better about football and call these actions a good start. But we need more. We need the NFL to send a clear message to players that this behavior will not be tolerated. But that means they need to provide players a place to get help if they feel prone to getting violent. The NFL must educate players early on how to treat women and deal with anger. You have to be aggressive to play football, so let’s make sure these players know how to handle that aggressiveness when they’re not on the field. And let’s get to players as soon as the problem starts manifesting itself. A perfect example is Jameis Winston; he’ll most likely play in the NFL one day but he’s already acting out and getting away with it. This is the perfect time to offer him some serious guidance because pretending his behavior is not going to get worse is simply laughable and as Goodell himself put it “ignorance is not an excuse.”

Bottom line, the NFL has FINALLY figured out that their female fans are important, they are finally listening to what we want. Let’s make sure they know what we want is a league that cares about women and one that sets the right example.